The Medieval Faction is a Faction in Totally Accurate Battle Simulator.

The Medieval Faction (originally known as The Crusaders) is the stereotypical medieval and crusader Unit, such as the swordsmen, the archers and also the knights, as well as simple artillery units including the catapult.

Although they do offer some unique Units, such as the Bard, which is the first distraction Unit in the game, they also have a healing Unit, the Healer, the first Unit to heal others, and a very early example of a support unit. They mostly have bland melee units that fight with swords.

They are balanced, but most of the units are considered melee(the ones that aren’t are healer, Bard, archer, and catapult). This faction offers the most cost-effective basic infantry in the game, the Squire. The faction's name was changed from "Crusaders" to "Medieval" due to the faction being based mostly on medieval warfare (5th century to-early 15th century) instead of the crusaders, who came along in later years. 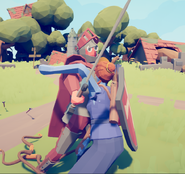 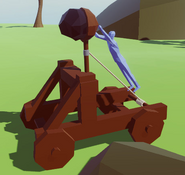 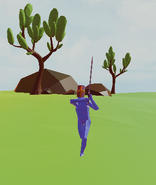 Retrieved from "https://totally-accurate-battle-simulator.fandom.com/wiki/Medieval_(Faction)?oldid=56637"
Community content is available under CC-BY-SA unless otherwise noted.