The Farmer Faction is a Faction in Totally Accurate Battle Simulator.

The Farmer Faction is a released faction in Totally Accurate Battle Simulator. In older builds, the Farmer was the only Unit with a farm aesthetic/design with it, and for a while, didn't have it's own faction to be categorized in.

It consists of several units focused around medieval agriculture, like scarecrows, pitchforks, along with lesser townsmen like the apothecary(Potion Seller).

Sadly, five of the units that were supposed to make it into the Full Release of the game, either were scrapped (Sickle, Butcher) or moved into other factions (Bard, Wizard, Spear Thrower(Replacement of the Skewer Thrower)).

This Faction is generally potent in offense and fair in defense, as the Harvester serves as a formidable heavy infantry unit, and Potion sellers as support, while the Hay balers serve as defense, protecting them from non-AOE and Non-Status Effect projectiles. 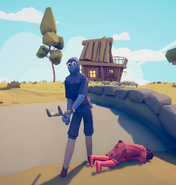 Farmer Faction Trailer
Add a photo to this gallery

Retrieved from "https://totally-accurate-battle-simulator.fandom.com/wiki/Farmer_(Faction)?oldid=56638"
Community content is available under CC-BY-SA unless otherwise noted.