View source
watch 03:01
Wiki Targeted (Games)
Do you like this video?
Play Sound

The Dark Peasant is a Legacy ranged Unit in Totally Accurate Battle Simulator. It is equipped with dark hands, encircling it and protecting it from almost every projectile in the game, and blasts of dark magic, capable of dealing massive amounts of damage.

The Dark Peasant uses the generic Wobbler units base and wears rugged, black and grey clothing, with red eyes, dark and evil auras around its real hands, and has black hands that move around the unit in a sphere, creating a personal shield and protecting it from all incoming projectiles and grabbing its next victim to annihilate.

The Dark Peasant grabs Units at medium range with its magic hands and either flings them into the air, throws them to another unit, usually killing both units, or slams them into the ground, creating a small explosion that does AOE damage and also usually kills the intended target. These hands will also appear right in front of any incoming projectiles ranging from arrows to Ballista bolts, which they block. Larger spherical projectiles such as Cannonballs, Catapult rocks, and Stoner boulders can also be grabbed by the hands and thrown away, usually right back at the unit that launched the projectile in the first place. The Dark Peasant's hands can also block bullets, but along with that, the blocked bullets will bounce back at the shooter. This only happens with bullets, such as from Musketeers, Deadeyes, Quick Draws, etc. (not the Gunslinger, though). Its other attacks are firing a stream of dark projectiles, each doing large amounts of damage and causing explosions on impact; you see, if a unit manages to get near the Dark Peasant (somehow) all of its hands floating around it will expand then quickly contract, causing a massive explosion in a "repulse" motion with a huge knockback effect that knocks any nearby units back and does major amounts of damage.

The Dark Peasant's appearance in the Closed Alpha

The Dark Peasant's appearance in the Open Alpha 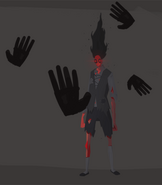 Dark Peasant defeating 200 Chronomancers all by itself

Dark Peasant dying to a large horde of Ice Giants

An example of a Dark Peasant that died to a lot of Tempest Liches
Community content is available under CC-BY-SA unless otherwise noted.
Advertisement